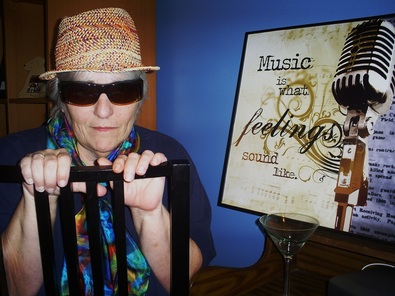 Susan Schoeffield, host of SBJ: Sooze Blues & Jazz, first dipped her foot in the broadcasting pool in 2010.  Working with her long-time friend, Mike DeVita, she co-hosted several shows on an internet radio station, eventually writing a few of the programs.  She later designed the original website for Mike's next venture and hosted programs at the site.  The website is still up and running and Mike recently started his own Live365 radio station (3M: Mike's Music Memories) where he continues to play the music that reflects his eclectic tastes.

Eventually, Susan decided to start her own podcasting site, but the musical parameters were too broad and she had difficulty finding her niche.  Abandoning the project, she struggled to find her true passion, which led her to Live365 and the creation of SBJ: Sooze Blues & Jazz.  In addition to her role as DJ and station programmer, Susan administers this website and manages its Twitter account and Facebook page.

Prior to broadcasting, Susan was the editor of an online poetry magazine.  She has written four books: a mystery novel, a children’s book and two poetry collections.  Susan lives in Baltimore, Maryland, but her mind takes several visits to the beach every day.  She is owned by two cats, a Black Labrador and a Basset Hound.