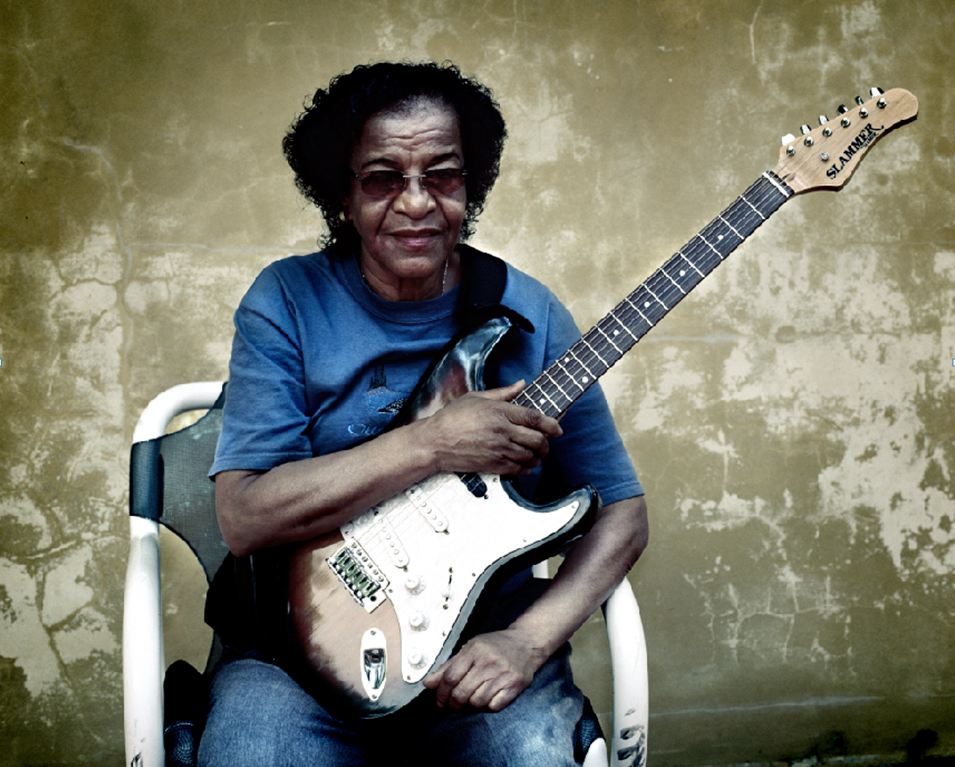 Georgia-based guitarist, singer, and songwriter Beverly "Guitar" Watkins is one part soul singer, one part rockin' roadhouse mama, and one part gifted songwriter. She's also been chronically under-recorded for a woman with her résumé: she spent the early '60s playing rhythm guitar with Piano Red & the Interns. She recorded with Piano Red from 1959 until the mid-'60s, and can be heard on his popular singles "Doctor Feelgood" and "Right String But the Wrong Yo Yo." Watkins learned guitar and got her earliest musical sensibilities from several of her aunts, who had a quartet named the Hayes Family. She also had a banjo playing grandfather, Luke Hayes. On holidays and at family get-togethers, these musicians would assemble and the blues and gospel were passed on in a true folk process to the young Watkins.

Her earliest influences included Rosetta Tharpe, Bessie Smith, Ma Rainey, and Memphis Minnie, and she was exposed to the music because of her grandmother, who would play their recordings on the family Gramophone. She began playing guitar as an eight-year-old, learning by listening to the records her mother would play for her. Later, she was exposed to the records of touring bands, including Louis Jordan's and Count Basie's. She began to model her playing after Charlie Byrd and Basie's rhythm guitarist, Freddie Green.

Throughout high school, she participated in a variety of talent shows and played trumpet in the school band. Her high school band master helped broaden her knowledge of jazz and blues guitar, and piano. In approximately 1959, her junior year of high school, she was introduced to Piano Red, who had a daily radio show on WAOK, and she subsequently joined Piano Red and the Meter-tones, who played in a number of towns in the Atlanta area, and then Atlanta clubs such as the Magnolia Ballroom and the Casino, before starting to tour throughout the southeast, primarily at colleges. About the time the group renamed itself Piano Red and the Houserockers, they started touring nationally.

In 1965, the band broke up, but not before going through several more name changes. Watkins then hooked up with Eddie Tigner and the Ink Spots and toured extensively with that group, playing for nearly a year with him before he was felled by a stroke. Watkins came off the road and took a break from the brutal touring she had done for much of the '60s. She worked a procession of day jobs as a domestic and in car washes before joining Leroy Redding & the Houserockers. Watkins worked on and off with Redding until the late '80s before striking out on her own and creating a residency for herself at Underground Atlanta, an Atlanta nightclub, often accompanied by a drummer and her son on bass. Here she developed her singing and harmonica-playing skills. Back in Business, her solo debut album, was released in 2001 as part of the Music Maker Series distributed by Sire Records Group/ Warner Bros. The album showcases Watkins' flexibility and prowess in a wide range of styles: roadhouse blues, jazz-inflected blues, and rockabilly-blues. Now in her sixties, Watkins continues to perform in Atlanta-area blues clubs and at major festivals around the United States. She put in a particularly compelling, energetic performance at the 2000 Chicago Blues Festival.

Watkins, who not only had a long and continuous musical career, but worked with artists like James Brown, B.B. King and Ray Charles, was well known for years within the blues community. However, like many roots musicians both black and white, she found it difficult to crack the airwaves, and achieved renown late in her career, after the advent of the Internet made it possible for musicians not backed by major labels to be heard by a wider audience. She was re-discovered by Music Maker Relief Foundation founder Tim Duffy, who started booking her in package shows, and in 1998, with Koko Taylor and Rory Block, was part of the all-star Women of the Blues “Hot Mamas” tour. Her 1999 CD debut, Back in Business, earned a W. C. Handy Award nomination in 2000.

Watkins was playing internationally (e.g., the Main Stage at the Ottawa Blues Fest in 2004) as well as in her hometown Atlanta until temporarily sidelined by surgery in 2005, but she recovered and again began taking bookings. She performed a set at the 2008 Cognac Blue Festival.

Sandra Pointer-Jones writes, "Beverly Watkins is a pyrotechnic guitar maven whose searing, ballistic attacks on the guitar have become allegorical tales within the blues community." George Varga, reviewing her debut CD, observed that Watkins “sings and plays with enough poise and verve to make musicians half her age or younger consider alternative means of employment.”
Click here to return to the Blues From The Piedmont main page.