Scroll down for the artist links

The City of Chicago’s long history with the blues goes back generations, stemming from the Great Migration from the South, particularly the Mississippi Delta region. Musicians came to the Windy City in droves in pursuit of more lucrative career possibilities. As a result, there has never been a shortage of blues acts in the Chicago area. While staying true to its roots, the Chicago Blues Festival is also represented by other musical genres influenced by the blues, including soul, jazz-blues and blues-rock.

Since those early days, the Festival has risen to such a high status that the City of Chicago promotes it as the world's largest free concert of its kind.   The proof?  In 1984, the Chicago Blues Festival took place on one stage with 165,000 people in attendance at the three-day event.  In 2007, the Festival took place on six stages with 800,000 people attending over four days.

In 1984, the first Chicago Blues Festival was held on June 8th, 9th and 10th.  Establishing a tradition that would continue through the years, a theme was chosen for the Festival.  Generally it honors a recently departed blues musician or pays tribute to one of its legendary masters.  Muddy Waters, considered by many to be the father of the Chicago blues, died on April 30, 1983, and the organizers, rightfully so, chose to celebrate this gifted musician and his far-reaching legacy.

The annual Chicago Blues Festival continues to draw in large, enthusiastic crowds.  For the past 28 years, some of the most significant names in this ongoing history of the blues have graced its stages.  Many of Chicago’s summer festivals have seen their share of downsizing, but the Chicago Blues Festival lives on as a weekend-long summer standby. Though budget constraints make it necessary to leave out some of the big names of years past, there are still a number of acts that shine, including a few home-grown performers.

Although the festival's origin is in the year 1984, it was in 1988 that the festival provided an opportunity to collaborate with the city of Chicago Public Schools on a program called, “Blues In The Schools.”  The program provides an opportunity for professional musicians to take up residency in the school several weeks prior to the festival to teach the children blues songs and blues history, and to provide the students a chance to perform and write their own blues songs, as well as prepare them to help open the festival with their performance.

Throughout the years, the festival has celebrated many benchmarks: from what would have been Robert Johnson or T-Bone Walker turning 80 years old to the centennials of Big Bill Broonzy, Bessie Smith, Skip James and others. Each benchmark places the blues in context, especially when icons like Sunnyland Slim, Jimmy Walker, and Willie Dixon were around to help keep the blues alive. In previous years it presented Honey Boy Edwards, Henry Townsend and Homesick James on days when the Blues in the Schools students performed. That's what the festival is all about -- showing the blues as a living tradition and celebrating the men and women who lived their lives playing and singing the blues.

With the obvious exception of Muddy Waters (who died on April 30, 1983), listed below is the roster of artists who performed at that initial Festival, and the dates of their appearance.  Click on a name for a brief bio and, when available, a YouTube featuring the work of that particular artist. 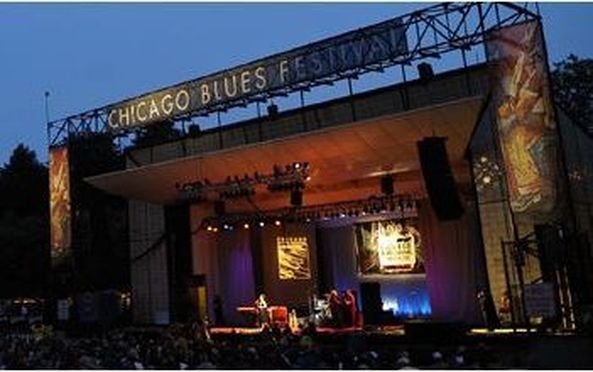 Click here to return to the Why I Sing The Blues main page.